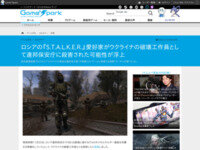 ・On November 23, the Russian Federal Security Service (FSB) announced that it had killed three Ukrainian saboteurs as they prepared to attack a border energy facility in Voronezh.

・However, the Moscow Times reported that it was a fan of the computer game STALKER who was killed.

・The Moscow Times has identified two of the three murdered. The two were survival gamers who also participated in the STALKER role-play game.