Is the basic free “Overwatch 2” billing item too expensive?It is controversial overseas that the price of key chain items in the game is higher than the actual goods 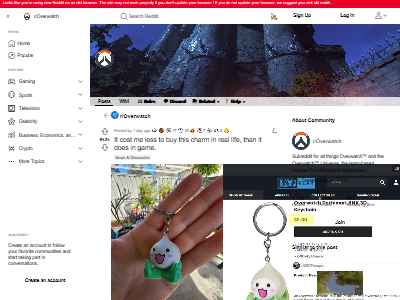 ・Pachimari’s weapon charm appeared as an in-game item for 700 Overwatch Coins ($7), but the physical keychain sold at Blizzard Gear is $5.In other words, it is more expensive to buy items in the game world than in the real world.

・Over 1,200 comments were posted on the overseas bulletin board reddit when a thread was posted stating, “This charm was cheaper to buy in the real world than in the game.”

What do you mean digital is more expensive

Seven dollars for a charm on a gun

You made a mistake in pricing

I don’t feel like they’re making a well-thought-out price.

Blizzard “I see! Fans want the price of the real thing to rise!”

Is it a joke that digital data key chains are more expensive…
In Overwatch 1, if you play the game, you can get gacha regularly (purchasable with billing), and you can get items from that gacha, but in 2, basic play became free. The free gacha has been abolished, and it has become a specification that you can directly charge and buy it.

I feel that Valorant and APEX are also quite expensive, and if the basic play is free, it may be unavoidable for the service…
But the pricing seems to be quite controversial overseas.