Is that title of the horror game “Zero” ported to the switch? ? Don’t miss tonight’s Nintendo Direct! ! 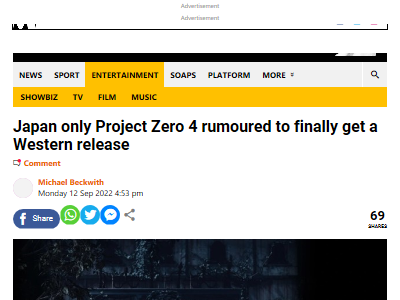 The possibility that Wii “Zero Gesshoku no Kamen”, which was released in 2008 only in Japan, will be ported to the Nintendo Switch has emerged.It could be announced as early as today’s Nintendo Direct.

This rumor was dropped by The Snitch, who has been leaking accurate leaks so far.

He didn’t actually name the title, just posted a “series of emojis” on Discord, which consisted of two masks, the sun > earth > moon, and a ghost. From the keywords of the sun > earth > moon (= lunar eclipse) and the mask, it is thought among fans that there will be an announcement of “Mask of Zero Lunar Eclipse”.

I just wanted to play Zero! I’m so happy!

I wish I could improve the graphics…

I personally want a remaster of 1-3

^Nintendo is the publisher

Oh, a lunar eclipse mask transplant?
I wonder if there will be some kind of new element instead of just a port?

Eventually, all past works will be ported… I wonder if they’ll do it! ?