Inquiries about Bridget’s gender in ‘Guilty Gear’ flooded → Officials clearly answered, “Gender identity is 〇〇”, and this time criticism poured in… It’s all messed up 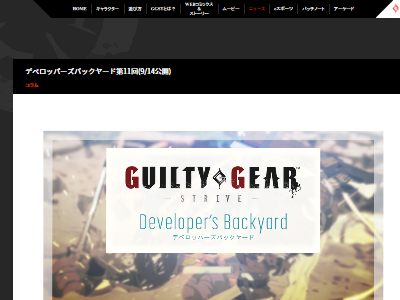 (Ishiwatari)
We’ve been getting a lot of inquiries about Bridget’s gender.However, after going through the Bridget story in Arcade Mode, Bridget came to identify herself as a woman.
that’s whyWhen asked which pronoun is correct, ‘he’ or ‘she’, Bridget answers ‘she’.

As mentioned in the character description above,Born as the younger twin brother, Bridget is raised as a girl by her parents, hiding her gender to protect her from village superstitions.

Afterwards, Bridget feels uncomfortable trying to live as a man.
The arcade mode story begins here. After interacting with Goldlouis and Kai, Bridget decided to face herself, who had dared to turn away from her, and make a big decision for her.
I would appreciate it if you would watch over the path that she took courageously and chose to be true to her own feelings.

Now that the official has made it clear that Bridget’s gender identity is female, we’ve arrived at the world line where you can’t call Bridget a man’s daughter…
It’s illegal to call a trans woman a man’s daughter.
The official should know about it, which means that it’s no longer possible for fans to interpret it in various ways, so it’s a tough decision.

Some people advocate that it has nothing to do with political correctness, but it’s not like the official doesn’t know that she was a “pioneer of male characters” for a long time, and on top of that, it’s too late to say “a woman, not a male girl” Nothing but succumbing to politics

It doesn’t matter if Bridget lives as a girl or claims to be a boy.
I don’t want you to define gender identity as a word that only uses political correctness LGBT.

I can’t imagine that this is the end of the story since the official has stated that Bridget’s gender identity is female~
Rather, I can imagine that more and more people are saying that Bridget should be treated like this as a trans woman, and those who don’t follow that are said to be trans discriminators who ignore formalities.

It’s not because the official said

People who say, “I gave in to political correctness,” “excessive consideration for foreign countries,” and “external pressure,” about Bridget, creators want to express themselves in this way! When the idea that it is the result of judgment does not come out, do not make fun of the creator! ? I think there are still a lot of airp, and it’s a problem before that…

One character called Bridget was killed because of the fuss made by overseas political correcters.
Because I became a ‘transgender woman’ instead of a man’s daughter, treating me as a man became taboo
It doesn’t matter if it’s just a single person, but if it’s a game character, the charm will go down.

Feels like one attribute died and another was born

I won’t go into too much detail, but overseas there is often controversy as to whether to call a male character “Mr.” or “Ms.”
In Japan, it’s normal for women to add “kimi” to their address…

If you don’t make it clear in the explanation like this, you won’t be able to understand it when you’re overseas.I personally think that

just what the official says

… troublesome!what is this
Because of the incomprehensible culture, everyone, including the official, is just in trouble…

Feeling that no one in the political correctness problem will be happy…
Is another culture dead?