Here is a list of titles that are almost confirmed to be released on PSVR2!

■ Past articles
[Expectation]PSVR2, you may be able to play a lot of titles!

Source: List of 51 titles confirmed to be released on PSVR2 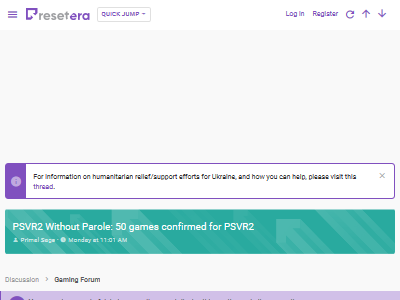 At this time, it seems that VR support for notable works such as “Gran Turismo 7”, “GTA5”, and “Half-Life: Alyx” is unknown.

List of titles confirmed to be released on PSVR2

In addition to this, ported works of PSVR1 titles will also come out, right?This is dangerous

I want the beat saver to be confirmed soon!

Personally, I have high hopes for VR in Bio 4 and Bio 8.Resident Evil 7VR was also great.

Oh, there is such a title at this stage!
If this and the VR1 titles that were rumored the other day are added, it looks like there will be quite a few!

For me, it’s a Japanese title… I really want to do something like Resident Evil
After all, I’m looking forward to seeing how far HORIZON’s VR titles will go!