Here is a game title that seems to be permanently unplayable due to the withdrawal of that service (´;ω;`) 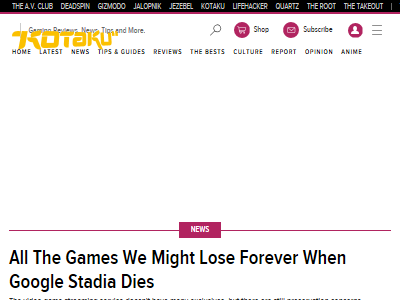 ・The end of service for Google Stadia was announced. Google plans to process refunds for hardware and software purchasers, but the future of games exclusively distributed on the platform is unclear.

Unless these games are ported to other platforms, they’re bound to commit suicide with Google Stadia.

・A total of 5 titles that can only be played on Google Stadia.Including the popular action ADV “GYLT” that became an exclusive launch title, 64-player Pac-Man “Pac-Man Mega Tunnel Battle”, the shooting game “Outcasters”, the action ADV “PixelJunk Raiders”, and the simulation game “Hello Engineer”. become

It would be a great shame for a game to disappear from this world in this way.I would like development studios and publishers to proceed with porting to other models for game preservation.

That’s why I said so much, if you fail

I played Gylt during the free period and it was fun~

In the first place, it ended before Stadia landed in Japan! ! ! ?

To all the developers, please port it… positively!