China, a gaming GPU that has tripled its performance in just half a year.Industry’s first PCIe 5.0 compatible, to be released on the 11th 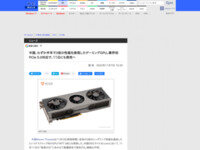 ・Limited quantities will be available on the Chinese EC site JD.com from November 11th. Price unknown.

・The S80 is the successor model to the “MTT S60” released in March this year, and adopts the second-generation chip “Chunxiao”, which doubles the number of cores from 2,048 to 4,096.

・Equipped with a function to compress bandwidth transfer at the same time, saving bandwidth by 30% or more

・It is said to be the first GPU in the industry to support PCI Express 5.0, and the transfer speed of 128 GB / s will eliminate the bottleneck of transfer between CPU / GPU.