Google, Stadia exclusive “Death Stranding 2” project has been canceled overseas reports “there is no place for solo games in the market” 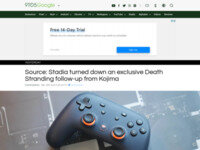 ・A source told 9to5Google that the game Kojima was working on was the sequel to the Stadia-exclusive Death Stranding.

・Death Stranding is an asynchronous multiplayer title where actions you take in your world can affect other players.

・Although the project for the sequel to “Death Stranding” was initially approved by Google, since “Death Stranding” is more of a single-player experience, Google believes that there is no longer a market for solo games, and Kojima’s cooperation has been canceled

・Shortly after the first mockup was published in mid-2020, Google abandoned the project altogether.

・Earlier reports said that Kojima Productions was working on an episodic horror game for Stadia, and that the project was canceled in 2020.

Ultimately, Stadia general manager Phil Harrison is said to have made the final decision to cancel the Death Stranding sequel.

-Since then, after a PC re-release, Death Stranding has grown into a critically acclaimed game, and a full sequel is said to be in the works.