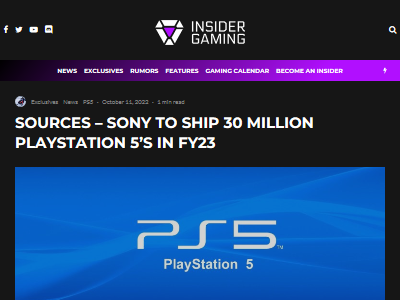 A source told the overseas site Insider Gaming,Sony seems to have set a PlayStation 5 shipment target of 30.5 million units during the 2023 fiscal year (March 2023-March 2024).

Production of the new PS5 with a detachable disk drive is expected to begin in April 2023, and will be released in September of the same year.

After that, only the new PS5 with a detachable disc drive will be sold, and this one model will be responsible for the disc version and the digital version.

I can’t buy it normally yet, but the shipping target of 30 million units is unrealistic

I feel like 30 million units is difficult, but I’m pretty confident

The SoC has also been miniaturized, and a low-priced version will be released next year.

30 million units! ?
It came out big again, can it really be realized?

Even though it’s been two years since its release, it’s still not possible to buy it in a normal store, and it’s sold by lottery online…
If we don’t do something about it soon, it will end before PS5 even starts.