“Nintendo OSAKA” will open on November 11th at the Daimaru Umeda store. Invited to pre-opening by lottery. 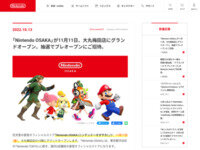 ・”Nintendo TOKYO/OSAKA” is Nintendo’s information dissemination base where you can not only sell game consoles, software, and character goods, but also enjoy game experiences and events. “Nintendo TOKYO”, the first directly managed official store in Japan, opened in “Shibuya PARCO” in November 2019.

・Nintendo TOKYO/OSAKA original goods with the theme of “Super Mario”, “Animal Crossing”, “The Legend of Zelda”, and “Splatoon” will be on sale.