Genius cartoonist “Adults who like superheroes have a low mental age. Such infantilization is a precursor to fascism.”

Genius cartoonist “Adults who like superheroes have a low mental age. People’s infantilization is a precursor to fascism.” 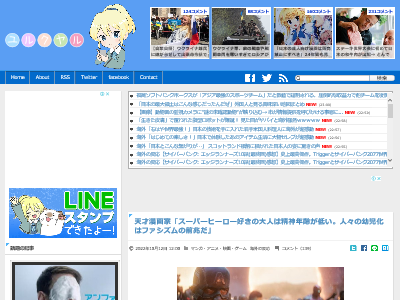 Alan Moore, the genius who worked on “Watchmen”, “From Hell”, “V for Vendetta”, etc., has once again given a bitter opinion about American comic movies.

Around 2011, I said that if millions of adults were queuing to see a Batman movie, it would have a serious and disturbing future.This is because the phenomenon of infantization, which insists on a more understandable and simpler reality and era, is very often a precursor to fascism.

Many adults line up to see characters and stories created to please 12-year-old boys.

I never thought superheroes were meant for adults. This is probably a misconception that was born around the time Watchmen came out in the 1980s. I am partly to blame for the unintentional ones. It was an era when many people said that American comics had become for adults.

Mr. Moore has called superhero movies “a disease” in the movie world before, and believes that “American comics are not for adults, but the mental age of the audience (lower) has become more suitable for American comics.” there is

I felt relieved with the usual Alan Moore (*´ω｀*)

Hmm? Hero stories are not about fascism but about giving people hope?

I don’t know how difficult things are, so let’s decide with our fists! Isn’t the law good for guys who are strong enough to hit each other?smile

Well… I think superheroes and the fascist regime are polar opposites…
Then what about me who draws manga?

“Even before” means that this is normal operation.