Game flame YouTuber Nakaido, new corona infection! “I couldn’t sleep for three days and thought I was going to die.” 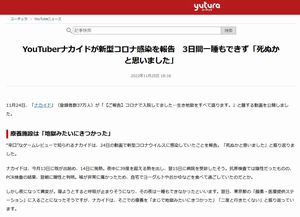 Nakaido, known for his “dry” game reviews, reported that he was infected with the new coronavirus in a video on the 24th. “I thought she was going to die,” she recalled.

Nakaido started coughing on the 13th of this month and had a fever on the 14th. She had a fever of over 39 degrees in the middle of the night, and she went to the hospital on the 15th the next day. She had a negative antigen test, but a PCR test showed her positive the next morning. Her throat was so sore that she spent her time eating yogurt and rice porridge at her home.

But at night something strange happens. When he tried to sleep, he almost stopped breathing, and that night he could not sleep at all.

The next day, he was admitted to an “oxygen and medical care station” in Tokyo, but Nakaido recalls that the treatment there was “really hard like hell” and “I don’t want to go there again.”

A large number of beds were lined up in the prefabricated facility, and Nakaid was just lying on the bed with an electrocardiogram and a blood oxygen concentration measuring device. She said she couldn’t sleep there, didn’t sleep at all for three days in total, and didn’t see a doctor once. Even if she took sleeping pills, she was in a painful state of repeating “sleepiness” and “stopping breathing”.

After that, he was admitted to the hospital and slept for the first time in a while. She gradually improved and was discharged on the 24th.

Even now, he seems to have a terrible cough and fatigue, and it seems that just being awake makes him sick. Nakaido once again reiterates his impression that being infected with the coronavirus not only physically burdens you, but also severely restricts your actions, saying, “Mental damage is also suffered.” Before the infection, he had not seen anyone for more than 10 days, and he only went to convenience stores and supermarkets.