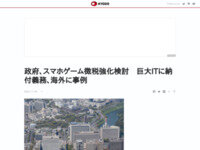 ・It was revealed on the 2nd that the government is considering strengthening tax collection for games distributed to Japan from overseas.

・European Union (EU), the UK, China, etc. have already established rules, and Japan will also consider revising the law based on these examples.