Fuka, the new idol of “Splatoon 3”, has emerged as a “male daughter theory” and a “non-binary theory” that does not apply to men and women → As a result of inquiries from overseas media to Nintendo, the truth has been revealed!


Fuka in “Splatoon 3” is a “female,” Nintendo of America has announced. Official answer to the non-binary theory debate – AUTOMATON 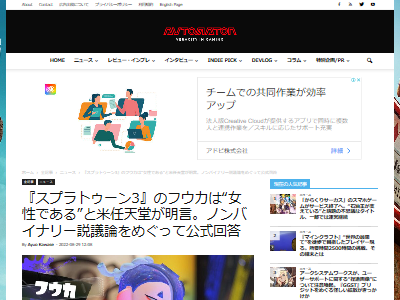 Nate Bihldorff, Head of Product and Sales, Nintendo of AmericaIt was revealed through inquiries from The Verge that Fuka in “Splatoon 3” is female.

Controversy arose over the gender of the character, whether it was non-binary.

Nonbinary gender refers to people whose gender identity (the gender they perceive, not their physical gender) does not clearly fit into either male or female gender It refers to the state that there is no (from IDEAS FOR GOOD).

Several arguments have been put forward for the opinion that Fuka is non-binary.FirstThe formula does not use explicit personal pronouns for Fuuka. Pointed out that he avoids using He/Sheis. It is also pointed out that the Japanese version does not use expressions such as “I” and “I” as the first person (Fuka uses “Uchi” as the first person at the festival).

However, Nintendo of America has responded to multiple media outlets, including The Verge and GameXplain, that Fuka is a woman.

However, some users seem to be unconvinced by this answer. On Twitter, a user who sent a DM to Nintendo of America about Fuka’s gender claims to have received a response that “Fuka is non-binary.” *The truth of this is unknown

It is this trio, “Surimi Union”, that excites the festival!
Fuka, the successor to shark use, Utsuho, a clan of moray eel use, and Mantaro, the master of traditional dance.
He comes from a prestigious family involved in the rituals of Bankara, and has mastered the secret arts passed down from generation to generation.
Locally, they are also famous as a trio of mischievous bad boys who are undefeated. pic.twitter.com/7opzjeQjvk

Lately, we’ve been discussing things that really don’t matter.
Too much political correctness is discrimination, isn’t it?

It’s a hassle because they’ll find the gold crane and try to parasitize it, so it’s bad

Does not matter
It doesn’t matter if it grows or not, it’s cute either way, so it’s OK

Either way is fine

Europeans care too much about this sort of thing

Both squid and octopus are cute.
That’s fine, squid

Such a place is very troublesome Europe and America

Isn’t there romance in not knowing which one?

Since you first appeared in the direct the other day, for various reasons, the “Fuka Otoko theory” came out … but did a high-ranking person at Nintendo answer that it was a female character?

Well, I don’t care about gender! Yoshi because he’s cute!
Some people say that Surimi Rengo isn’t cute, but I really like it!