Developed from VALORANT to a murder case, my sister killed my sister who played with her boyfriend in the game 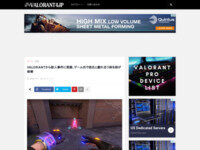 ・According to reports from overseas media The Orlando Sentinel and The Daily Mail, a 21-year-old woman living in the United States killed her sister with a knife while playing “VALORANT” with her boyfriend.

Fatiha Marzan, 21, has admitted to killing her 20-year-old sister with a knife while playing VALORANT with her boyfriend.“I didn’t like their relationship.”has stated that

・When Marzan learned that his sister was sending messages such as “I love you” to his boyfriend in the “VALORANT” in-game chat, he bought a dagger-shaped knife on Amazon.

・He hid the knife in a closet and stabbed his sister three or four times in the heart at 4:30 am on September 26, when the family was asleep.

Marzan surrendered himself to police after committing the crime