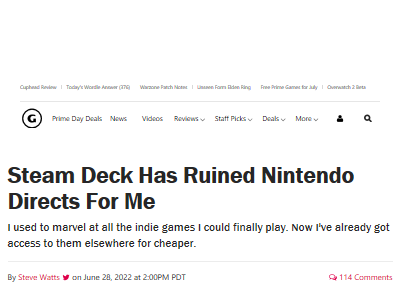 ・I think everyone has experienced the experience of finding an interesting and experimental PC title and thinking, “I wonder if it will appear on Switch.”But that’s gone thanks to the handheld Steam Deck

・For example, at the Nintendo Direct Mini the other day, it was announced that the Switch version of “NieR: Automata” and “Portal” would be released, but both are already playable on Steam, and Steam is overwhelmingly cheap.If it’s “Portal”, the Switch version is $ 20, but if it’s Steam, you can buy it for $ 3 (sale price)

・In the past, whenever an interesting indie game came out, I used to check the Nintendo Direct to see if there was a Switch version. The Switch was the perfect portable device.But now that I’ve bought the Steam Deck, I don’t have to have the same hopes

This will ruin Nintendo (stick)

I’m exactly the same.It’s a pain to go back to Switch anymore

I wonder if this is that
Nintendo should only release Nintendo games… is that what you mean? ?