[Flame]Square Enix’s new title “Symbiogenesis”, rumored to be Parasite Eve, turned out to be a new IP related to NFT → Overseas gamer Buchigire 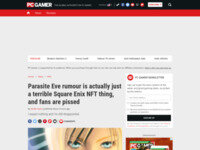 ・Square Enix has officially announced a new NFT collective art project, Symbiogenesis. It will appear as a free browser service in the spring of 2023

・Several weeks ago, Square Enix registered a trademark for “Symbiogenesis” in Japan, and there was a lot of talk about the word being related to the 1995 classic “Parasite Eve.”

・2How foolish to put your trust in Square Enix in 022. The announcement that ‘Symbiogenesis’ was an NFT project spread quickly, sending ‘Parasite Eve’ fans outraged and saddened.

・Since “Symbiogenesis” has been announced as a new IP,It has nothing to do with “Parasite Eve”

・Square Enix’s obsession with NFTs is bizarre and frustrating.The company’s president remains enthusiastic about the concept despite admitting he dislikes NFTs

・It’s mind-boggling that a once-reputable developer has fallen to this point and is gouging out so many Western studios and series in pursuit of particularly silly things.