GREE’s first quarter operating profit increased 2% to 1.584 billion yen due to the strong performance of smartphone games such as “Hebbang”, and although the game business exceeded expectations, the investment business was in the red. 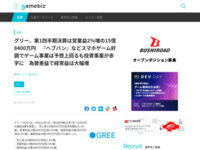 ・Smartphone game operations, centered on “Heaven Burns Red,” remained strong, and the Internet and entertainment business achieved a significant increase in profit that exceeded the forecast.However, the investment business, which earned 1 billion yen in operating income in the same period of the previous year, turned into a deficit, resulting in a single-digit increase in operating income.

(1) Internet and entertainment business
Sales were 16,131 million yen (up 30.8% year on year) and operating income was 1,777 million yen (up 263.5% year on year). According to the company, sales of app games in the game/animation area were solid. It surpassed the forecast (low 1 billion yen range) at the previous financial results briefing.

In the mainstay game/animation domain, the Company has worked to stabilize earnings through a long-term management structure for existing smartphone games and improve profitability through overseas expansion, while promoting the development of new app games.

In the Metaverse area, we have expanded the content and communication functions of the virtual live distribution app “REALITY” while promoting global expansion.