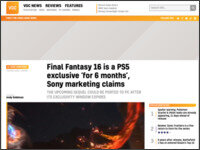 After the release of “Final Fantasy 16” in the summer of 2023,Exclusive to PS5 for at least 6 monthsseems to be

Along with footage from FF16, according to a new marketing video released by Sony on Monday.“Final Fantasy 16 is scheduled to be released in the summer of 2023. Exclusive sale on PS5 for 6 months”is described.

This means thatFF16 could be ported to PC in 2024I’m saying that. So far, the title has only been announced for PS5.

Curiously, the 2020 game reveal trailer mentioned a PC version, but this reference was removed in later versions.

Recent franchises like FF7 Remake Intergrade have finally made it to PC.

FF7 Remake’s 12-month PS exclusivity was set to end in April 2021. However, with the release of the PS5 intergrade version in June 2021, it seems that this has been extended by half a year.

Sure enough, the PC version of Intergrade was released in December 2021, almost half a year after the PS5 version. However, FF7 Remake has yet to be released on Xbox, more than two years after its original release.