[Expectation]PSVR2, you may be able to play a lot of titles!


Rumor: Tons of developers working on PSVR1 titles for PSVR2 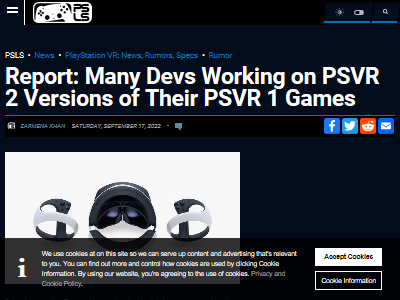 SIE recently revealed that PlayStationVR2 (PSVR2) is not compatible with older generation machines,According to a trusted source, a “massive” of developers are working to make PSVR1 titles playable on PSVR2.

We will though! Tons of devs are working on PSVR2 versions of their PSVR1 games as we speak! 😀


“You can watch PSVR1 titles in high definition! A lot of developers are currently working on PSVR2 versions of PSVR1 titles!”

Hideaki Nishino says that PSVR2 is not compatible with PSVR1 because it is “designed to provide a truly next-generation VR experience” such as haptic feedback, inside-out tracking, eye tracking, and 3D audio. Mr. had made it clear.

Great! It would be even better if you could respond with a free patch!

I wonder if it will feel like a PS4 → PS5 upgrade

I wouldn’t buy it if it was paid

If it’s just Astro and Bio 7, I can pay you.Anyway, I want to play that masterpiece in high resolution

The first VR title will come to 2…maybe!
I really want to do something like Bio 7~~!

VR2 may also reduce VR sickness.
I want to redo the titles I bought but didn’t play at all~