[EU chart]Momentum to surpass the cumulative sales of the previous Vanguard in two weeks after the release of “CoD: MW2”! PS5 beats Switch sales for first time since September 2021 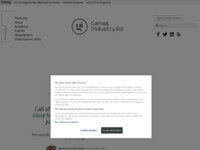 ・11.9 million video games were sold across Europe last month, up 1.5% from October last year, according to the latest GSD data.

·this is,Significant increase in download sales of new titles such as FIFA and Call of DutyIt is also a factor that

・“Call of Duty: Modern Warfare 2” surpasses “FIFA 23” to take first place in one week of release

・In fact, in just two weeks, Modern Warfare 2 is already on the verge of surpassing Vanguard’s lifetime sales in the European market. ‘Modern Warfare 2’ is already the third best-selling game of the year, after ‘Elden Ring’

・Last month, 367,821 game consoles were sold in the European market, down 33% year-on-year. *This data does not include figures for Germany and the UK.

・In a rare move, the PS5 surpassed the Nintendo Switch as the best-selling console of the month.

・It’s the first time since September 2021 that the Nintendo Switch wasn’t #1 across Europe.

・October sales increased year-on-year only for the Xbox series, which increased by more than 26%.