An acquaintance who can’t draw at all made his debut as a painter using AI, but it’s better than the illustrations I drew with a pen.
I don’t want to admit that I’m a painter, but he says
“It’s the difference in art materials. People in the past used brushes, you used pens, and I used AI, but we’re all the same painter.”
Is it like that?

The story of an AI painter (personal opinion) pic.twitter.com/nzAOlhXjmc 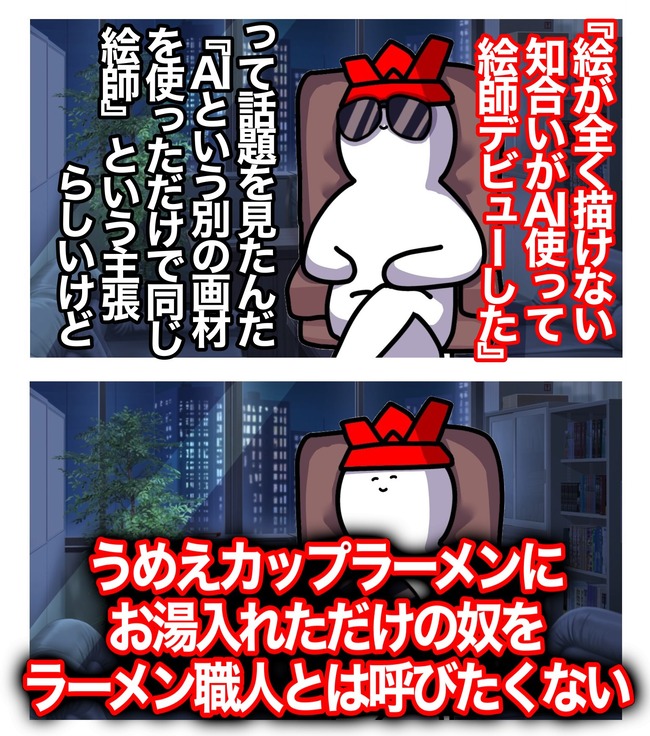 Don’t you feel too much for appealing that it doesn’t work?

If you don’t want to call me separately, then I think that’s okay
It may be cup ramen, but it’s definitely ramen, so nothing has changed

In reality, there are almost no AI painters who claim to be AI painters

It is a story that cup noodles reproduce the professional taste without inferiority.

A cup of noodles is enough

Did you draw it with AI? w

The ramen I made is losing to cup noodles

Is it a cup ramen level so much as you say?
The quality of the home-made noodle set class sold by super popular ramen shops is high, and it’s still under development.
I can’t afford to grow

People who are not good at analogy want to compare

The important thing is whether it’s delicious ramen or not.
If you can make delicious instant ramen, you don’t have to be a ramen craftsman.

It’s not that the AI ​​painter is amazing, it’s just that the value of the painter is disappearing
everyone can be a painter

Cup noodles are strange to say
Cup noodles have the deliciousness of cup noodles, but they are different from ramen.

AI is great without needing approval

Just because you can draw, you’ll be treated like a god on Twitter, so don’t get me wrong.

not a painter
There are too many people who go mad like this isn’t real
People who use such things don’t care what they call them, they use them regardless.

it’s the opposite
If cup noodles are good, he’s not a craftsman
The problem is that cup noodles (AI) are better than most craftsmen (painters)

Everyone went to the AI ​​painter’s drawing, so the number of people who cheered for them decreased, and the painters are angry

Why are you making such a fuss?

↑ Jealousy of those who failed in painting until now
Even kindergarteners can draw pictures, but it takes effort and talent to reach a level that can be shown in front of people.

In the first place, the artist is just an amateur who draws and calls himself a painter, right?
In that case, I think AI painters should call themselves selfishly.

The current problem is that AI is using pictures posted on the internet without permission.
No matter how much you say it’s not illegal, people generally think you’re stupid.
What you are doing is the same as psychic marketing and resellers

↑ Certainly yes, but now there are only people who are making money with skeb and fanbox while drawing copyrighted illustrations and infringing copyrights.
Even though I earned my own money from other people’s things, I was treated the same way, and it’s too convenient for me to talk about ethics.

You can treat me like I’m making cup noodles, but yeah
If you make ramen by hand, make it more delicious than cup noodles

The painters who express their feelings are learning other people’s paintings without permission, and they don’t even have a fragment of originality…
At most, it’s about the people who made it with bag ramen

If you want to find value in what people draw themselves, you have no choice but to quit digital.

I’m stuck in the internet drawing man
Well, I don’t understand why I’d be upset if a random AI were about to steal my identity

The one who used AI even though I had a hard time drawing it is fun and cunning!It’s right
It’s a bad thing about Japanese people.

I know exactly what this artist is trying to say…
I’m more of the same opinion, and I’m negative about AI painters.

But… that’s the “old way of thinking” “now”… AI is evolving at a speed that we can’t even imagine.
So shouldn’t we upgrade our way of thinking accordingly?I can just leave it as it is

Well, I don’t think the painters who have worked hard until now don’t want to admit it…
But even if cup ramen becomes more delicious in the future, is this way of thinking okay?