“Elden Ring”, two new map data are discovered in this update! Is it a map that will be implemented in DLC? 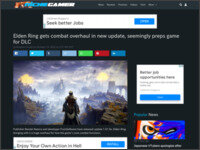 ・The other day, an update was made to Elden Ring.

・With this update, fans immediately started analyzing data on their PCs.

・Then,There were 2 new maps in the update fileIt says.

・Fans have found out that the maps are “M20” and “M45”,The former has the same naming conventions as traditional dungeons, but the latter is completely new, laying the groundwork for what FromSoftware is planning for post-launch content.suggests that

The update also includes references to two new maps that do not yet otherwise exist in the game data.