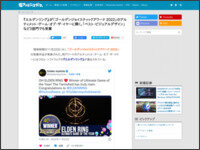 ・The winners of the British game award “Golden Joystick Awards 2022” have been announced.FromSoftware’s Elden Ring was named Ultimate Game of the Year.

In addition to Ultimate Game of the Year, “Elden Ring” won awards in three categories, including “Best Visual Design”, and the developer FromSoftware was awarded “Studio of the Year”. has been elected to

・Also, “The Legend of Zelda: Tears of the Kingdom” won the “Most Wanted Game” category.