EA Announces New Iron Man Game! The genre is action-adventure, and the development is Motive Studio, which worked on the remake version of “Dead Space”. 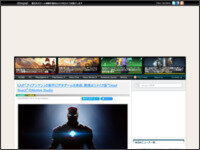 EA and Marvel Entertainment have announced a new Iron Man video game, and Motive Studios and Marvel Games are working together to develop an Iron Man action-adventure.

・Currently in the early stages of development and details are unknown, it is known that Tony Stark will draw an original story that will focus on his charisma, creativity, and complex character.