“DQ10 Offline” A dry review by major game media!A lot of bugs remain even after 1 month from release 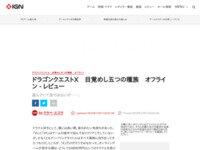 ・”X Offline” adopts a different visual style from “X Online”, with deformed two-headed characters adventuring in a world made of rough polygons.

・I often see visuals that arrange pixel art for modern times,“X Offline” is a form of expression that is somewhat reminiscent of the original PlayStation

・Many of the events use visuals from X Online.Even within the same event, the visuals and the character’s head and body change rapidly in the middle of the dialogue

・Not only did the visuals lack consistency, but the purpose of using different head and body was also unclear, making me wonder if there was a vision for art in the first place.

・Several popular characters from “X Online” are joining the party,The problem is that you can’t give instructions at the beginning of the game, and you join as a “guest” who fights on your own.

・Depending on how you proceed, there are few companions who can give instructions even if you play for nearly 10 hours

・Fellows rarely get involved in conversations during events

・Battles become more interesting when the number of friends who can control them increases.

・In the middle of the main event, the story gets exciting, and at the timing when the lines of the companions are also prepared, the main character gets separated from the companions and acts alone.

・In addition, “guests” who cannot be instructed even in the main event are added, and they repeatedly “attack”.The fun of battle is temporarily lost

・The main story is short, and more than 80% of the game is collecting key emblems

・The key emblem collection made the pattern monotonous and redundant

・Combined with the long road, it became a hassle to go back and forth between the castle and the cave.

・I was worried about stuttering during battles and events.Similar problems have been reported on the net for other versions other than the Switch version.

・The boss design is excellent throughout,In the second half, I was looking forward to playing only the battle with the bossIt is no exaggeration to say

・Symbol encounter monsters are unlikely to be caught if you hold the dash button.Fields and dungeons have little significance

・If you don’t enjoy side activities with a design based on the premise of “mysterious blacksmithing”, the recipes for strong equipment will hardly increase.Users who want to play around the story have to give up strong weapons and equipment

・Even common facilities such as banks and taverns often cannot be used without completing subquests.

・Most of the side quests are boring

・Ingenuity that can be enjoyed as a solo RPG as a whole is lacking.lack of original ideas