Dinosaur survival action “ARK” is now available for free on the Epic Games Store! People who haven’t gotten it yet are crazy! !

Dinosaur survival game “ARK” is now available for free on the Epic Games Store. Tactical RPG “Gloomhaven” that supports up to 4 people’s cooperative play is also being distributed for free until September 30th 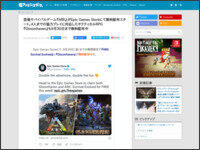 ・At the Epic Games Store, “ARK: Survival Evolved” and “Gloomhaven” are being distributed for free for a limited time until September 30th.

・”ARK: Survival Evolved” is an open-world survival game set in a world where dinosaurs and other ancient creatures live. The player becomes a survivor, secures food and water, and crafts various items and buildings to survive in a harsh environment.