“Diablo” who was the pinnacle of Hakusura, this is the latest work that has become a miserable figure… 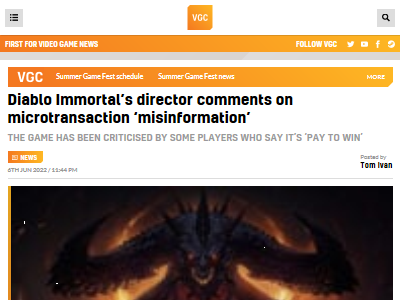 Wyatt Cheng, the director of this work, has issued a comment in response to criticism of charging for the free-to-play game “Diablo: Immortal” released on the 2nd of this month.“The game is being evaluated based on incorrect information,” he said.

・Blizzard has explained in the past that “you don’t need to spend money to acquire equipment or rank up”, but it seems that they recognize that equipment and gems are different things.Director Cheng said“Many interviews have made it clear that the equipment is 12 item slots, and that gems and legendary gems are paid to advance.”commented with

·HoweverOn the other hand, the fan said, “It’s not a big problem that you can ‘fundamentally’ buy strength, but ‘literally’ you can’t buy equipment.”arguing with

・Another fan said, “Why should I argue? Why should I feel sorry for the billing elements of a game that took 6 years and over $50 million to make?”And the voice.“There’s a difference between liking or disliking a game based on misinformation versus the value of the game itself. I don’t like misleading information,” Cheng said.are reacting with

・On Metacritic, the iOS version of this work has a user score of 0.5 points.

“(Although you can transcendence enhancement with billing) you can’t buy equipment enhancement. I’m not lying.”

To sum it up, “You are the ones who misunderstood.”

It’s a game that greatly enhances with gems rather than equipment, but Blizzard is the one who gives the wrong information…!

As long as there are idiots who pay a lot of money, the billing system will continue

This game
Equipment such as armor, helmets, gloves, etc.
It’s a mechanism that fills its contents with gems and strengthens it.

So, what Blizzard said was, “You can get equipment if you do it without paying.”
“However, the gems that enhance the equipment are paid.”
that means

So, this is clearly being criticized as pay to win.

You should stop thinking about Diablo as a hack and slasher.
This is a reasonably well done billing smartphone action.
I decided to think so.
If you want to hack and slash, there will be a Diablo 2 remake