PS5, model number 1100 series will be discontinued without being able to buy pic.twitter.com/DCgjUXy2TM

A fucking maker that won’t supply to those who want it pic.twitter.com/PVJ1FPOkKN

Is PS5 1100 type discontinued?
I don’t know much about the game industry, so I don’t know, but why is it such a ridiculous story that a model that is discontinued before it reaches so many people who want it? 🤔 Is it so difficult to make one by one?

It seems like a lot of people mistakenly thought the PS5 was discontinued.

Only the 1100 series before the price increase has ended, and the 1200 series with minor changes still remains.
Amazon’s request was received by model number, so it was canceled.

PS5 production has ended from Amazon, but are you just saying that the current model number (CFI-1100) has finished shipping and will shift to the new model (CFI-1200)? pic.twitter.com/5qY1sCqYzD

Amazon has announced the end of PS5 production
After shipping the current model number (CFI-1100)
Are you just saying that you’re going to shift to the new model (CFI-1200)?

The early model of PS5, production ended without being in the hands of those who want it at all
The 1200 model will follow the same path, and the PS5 is the second failed hardware after the PSvita.

Is it a model number story that PS5 production has ended?
As a reseller, if a new low-priced version comes out, will you have a large amount of high-end inventory?

It seems that the old PS5 before the price increase is no longer in production, so just by not buying from resellers, their inventory can be “a pile of expensive and old things”.


Reactions to this article


・PS5 that I bought,
Because it was a discontinued model (CFI-1100) model
I got mad, but
After checking, the difference from the new model number (CFI-1200) is
I was relieved that it seemed to be only about weight reduction and low power consumption
Well, people who buy from now on are better off with the new model.
I would like the reseller to die in an explosion with the stock of the old model at most.

・Not in general circulation at all
Production of the early version of PS5 has ended.
I haven’t seen the real thing yet.
If you see the PS5 initial lot in the future,
That’s what resellers sell.

・PS5 old model is out of production
I hope that the reseller KS who has stock will reduce the price below the list price
Imagining it makes me happy and irresistible
If everyone sees the old model lined up on the screen, let’s provoke

・I thought PS5 was out of production.

・People who couldn’t buy PS5
I’m mad at Amazon’s PS5 production end announcement,
If it’s discontinued, wouldn’t you be relieved that you didn’t have to buy it?
Everyone is too sharp with conditioned reflexes 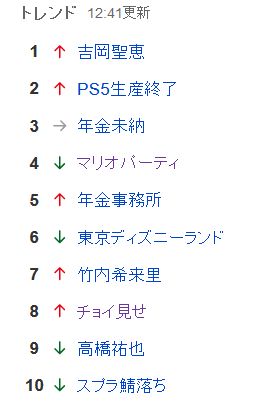