[Caution]A new vulnerability has been discovered in Apple’s OS, and the official alerts! iPhone/iPad/Mac users may be hijacked, so update the OS immediately! 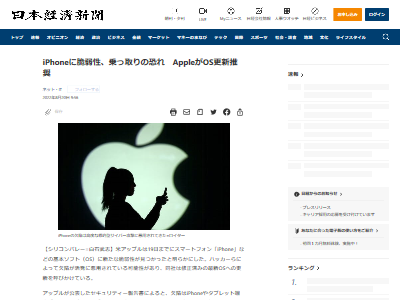 Apple announced that a new vulnerability was found in the basic software (OS) such as the smartphone “iPhone” by the 19th.
The flaw may be actively exploited by hackers, and the company is urging users to update to the latest fixed OS.

According to a security report released by Apple,Defects found in operating systems such as iPhone, tablet terminal “iPad”, personal computer “Mac”. Processing maliciously crafted web content may lead to arbitrary code execution. Experts point out that the device could be hijacked by an attacker.

I use iPhone 6 and 7, but it’s really helpful to have security updates for such old models.

I just updated my iPhone to the latest OS.
Ah, but docomo recommended security software for me.
I have to update the ipad I’m not using

If I hadn’t seen this news, I would have accumulated updates, thank you

Is this it? Were there any vulnerabilities? . .

Can you still update a model from 7 years ago?

It seems that a vulnerability has been found, so iPhones and iPads should update their OS now!
Hurry up! ! ! I don’t care if I run out of time! ! !