Bugs with Apex, Replicator, Loba abilities and more have finally been fixed! !

Fixed bugs in Apex Replicator, so you can use it with peace of mind! Update at midnight on the 14th | Inside 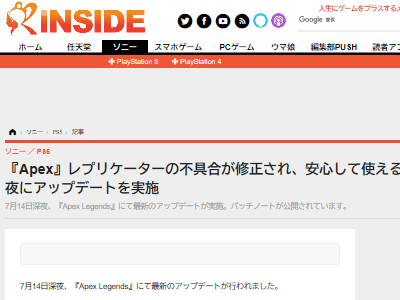 At midnight on July 14th, the latest update was made to Apex Legends.

■ Patch notes
– Improved various Xbox headset and VOIP quality issues.
Fixed Loba’s tactical ability failing for no reason.
Fixed an issue where Wraith would not take damage at certain points when using abilities.
-Fixed a bug where functionality was lost when using the Replicator.
– Various other fixes have been made.

The jump drive and replicator bugs can be fatal, so I wanted them to fix it…

The Replicator guy is really helpful.I had many matches that I could have won without him.

Pay attention to what kind of bug was added next

Canceled during purchase at Arena

Did you just fix it
Both were fatal flaws.

>I get a lot of cancellations during purchases in the arena

this is plain annoying
Even though I had purchased it, it suddenly got cancelled, so I missed the button input, and I punched the stray friend in front of me, which made me feel awkward…