[Breaking news]”PlayStation VR2″ will be released on February 22nd! ! ! Worried about the price wwwwww 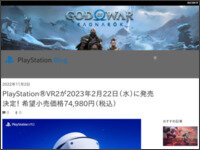 ・Over the past few months, we have introduced the overwhelming immersion and next-generation virtual reality experience that PlayStation RVR2 enables. Today, we are pleased to announce that the release date of PS VR2 has been decided on February 22, 2023 (Wednesday). The PlayStation VR2 Sense™ controller charging stand will also be released on the same day.

The suggested retail price of each product is as follows. Sales status in each country/region may vary depending on local import regulations.

For multiple titles including “Horizon Call of the Mountain”, reservations for individual software will start sequentially from November. Information on each title will be released at a later date.

In order for users who play PlayStation® to purchase PS VR2 on a daily basis, Sony Interactive Entertainment is targeting “PS VR2 “ Horizon Call of the Mountain ” bundled version” in Japan, PlayStation ™ Network We will accept applications for pre-orders that link accounts

. Details on pre-orders will be announced on PlayStation.com on Monday, November 21st.

In addition, “PS VR2”, “PS VR2 “Horizon Call of the Mountain” bundled version”, and “PS VR2 Sense Controller Charging Stand” will be available for general sale at each retailer at a later date.

PS VR2 is equipped with various functions such as headset vibration, gaze tracking, PS VR2 Sense controller adaptive triggers, and haptic feedback, thanks to “PlayStation VR2 Sense™ technology” that enables a unique gaming experience. Players can enjoy a rich game experience that appeals to the five senses and an overwhelming sense of immersion through games that support these functions.

In addition, you can experience the world of next-generation virtual reality by tracking the controller with the camera installed in the headset and supporting the high-definition 4000 x 2040 HDR video format (2000 x 2040 per eye).

It’s exciting to see how software makers are using the various functions of PS VR2 to develop next-generation VR games. We are planning to release more than 20 titles at the time of release, and I can’t wait for the day when users will pick it up in February. We will continue to provide more information about the lineup of launch titles, so please look forward to it.