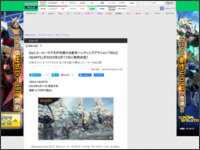 ・This work is a new title developed by Koei Tecmo Games’ ω-Force and released on EA’s Originals label. It supports “co-op cross play” that allows up to three people to hunt beasts together, and in addition to Japanese, it supports dubbing in English, French, Italian, German, and Spanish.

・The stage is medieval Hinomoto, Azuma no Kuni. Many people used to live there, but beasts that have evolved uniquely through fusion with nature have expanded their power, and now most of them are about to be swallowed by the beast’s realm. The main character, who has become a master of the ancient technology “Karakuri”, throws himself into hunting to restore the old life in “Azuma no Kuni” where the threat of beasts is approaching.