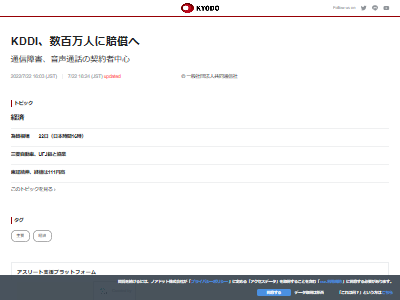 KDDI said on the 22nd that there were times when millions of users could not communicate at all due to a large-scale communication failure in the beginning of this month.announced its policy of compensating for damages.Expected to be mainly users who subscribe to voice calls only.We will also consider whether to take some kind of action under the pretext of “apology” for users who are not eligible to pay compensation.

We also prepare an accident report that includes the cause of the failure and measures to prevent recurrence.Submit to the Ministry of Internal Affairs and Communications on the 28thI also gave my thoughts.

The failure occurred in the early hours of the 2nd, and it took 86 hours to fully recover on the afternoon of the 5th.Up to 60% of the total contract39.15 million lines were affected.

The degree of actual harm varies from person to person.
Make it possible to bill separately
Don’t run away at any cost

how much is the apology stone

It’s a 500 yen ticket
Since the Softbank Incident, compensation for this type of compensation has been fixed at 500 yen.

Ah, I lost my 10 million contract that day, it was because of au.

Do you cover the damages caused by Docomo users not being able to contact au users?

I sent about 1000 times to complain later

hand delivery
Since it is a company mobile phone, the company will take it if it is mailed to the address.

Personally, I don’t need compensation for annoying charges, but there were many times when only the line was connected and I couldn’t make a call, so I’d like you to return that amount exactly.

Mainly subscribers for voice calls only…
It’s hard to find people like that these days!

Others are still in the “consideration” stage…
Well, there is some kind of compensation for everything, and the company is leaning.
find a good place to drop it