■Past articles…
Illustration generation AI has achieved transcendental evolution, making it easy to draw really cute anime pictures and secondary creations! → However, an outrageous fact turns out to be controversial. 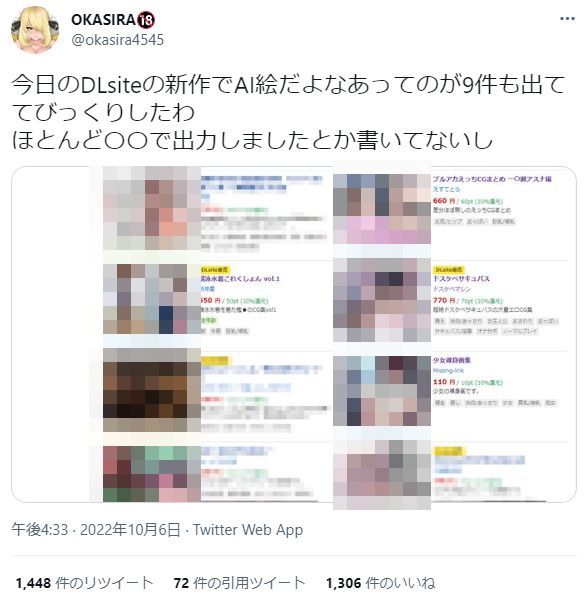 If you look closely at the simple CG collection of a new circle that has been recently registered on the DL site, you can see some clearly strange things, such as the arms disappearing in the middle… I have to be careful when buying…

It seems that a person who sells only AI-made pictures has begun to appear on the DLSite sales page
I personally think it would be nice to add some text, but it’s better to take a good look at the sample
There are various strange parts such as the picture is not stable

From now on, a new era will begin in which we can only trust long-established stores that have been selling doujinshi for a long time… pic.twitter.com/I8omxXSEdG

DLsite’s new work, it seems that there are quite a few works that seem to have been output with a drawing AI. be 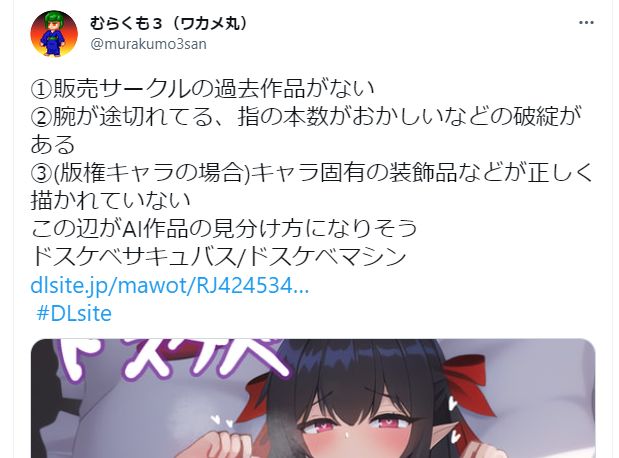 I confirmed that DLsite sells CG collections for adults created with AI.

Certainly, if you can mass-produce this much in a short period of time, it is understandable that you will be deprived of your job as a painter.
A matter of time to squeeze share.

It’s actually selling well, so if an AI-powered work wins the top spot in the sales ranking, it might change the way you think about it.

dlsite, it’s dangerous to have a guy selling AI-generated secondary creation illustrations as CG collections right away, and the management of dlsite that passes such things is also dangerous.@DLsite

Pictures generated by AI on DLsite are starting to sell

I tried to swear that selling AI pictures that anyone can output at a price would be like making people eat retort curry, but this is a bad analogy. There are shops that do it normally. Or is that the case? Is it a fee for ordering instead of AI tone deaf who can’t order from AI? DLsite-kun countermeasures

If DLsite doesn’t set rules for AI-made illustrations as soon as possible, it will become a fucking market where users have to dig around.

You might think I have a bad personality, but when I see AI illustrations lined up on dlsite and pixiv, I don’t want them to be treated in the same way.

If you describe it as “In 2022, AI mimicking humans on the Internet will begin to mix with humans and cause damage”, it’s a situation with a sense of cyberpunk, but I just add that it’s a story with AI drawings on dlsite and FANZA. Why do you suddenly become sad

It’s not confirmed that AI paintings are sold on DLsite, but if you’re selling a collection of generated illustrations, seriously stop it
You can’t pay the same amount for a handwritten work and a work randomly generated on a computer.

When I search on DLsite, I see a lot of voices asking the platform to take some kind of countermeasure against AI-output CG collections, so I’m wondering what it is. It’s not like it’s being posted in large numbers as a DoS offense, and I have to say that… well… there are already a lot of illustrations that aren’t very good even if they’re drawn by humans…

Looking at the rules on the AI ​​site side, it seems that the generated illustrations are the responsibility of the creator, so the ones on DLsite now are stuck.

I don’t care about copyright and so on because it is a matter of individual parties and sales items. As for maintaining the quality of DLsite’s sales, it doesn’t really matter if it’s an AI because the sales site is the one that lets you sell even graffiti assortments in the first place.

This is… the beginning of the end
But AI is constantly evolving…it will overtake humans in no time…the day when artists will really be exterminated is coming.

Even if the sales of this DLsite are regulated, the fact that “AI paintings are in demand and sell” will not change.
Eventually AI paintings will erode in another place… It’s a really scary evolution…