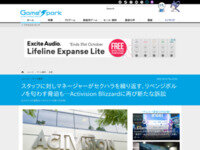 ・The lawsuit was filed in Los Angeles by a former employee of the company (name not disclosed), and the lawsuit covers Activision Blizzard itself and Miguel Vega, the former manager of the female employee.

・According to the content of the claim,Miguel Vega’s abuse, disrespect, and demeaning behavior was encouraged by Activision Blizzard’s failure to stop sexist harassmentand

・After getting acquainted with Mr. Vega around 2009 or 2010, the woman allegedly sent a photo that hurt her reputation.

・The relationship with Mr. Vega ended around 2011, but around 2016 Mr. Vega offered a woman a job at Activision Blizzard.

・However, during that job, Vega engaged in sexually harassing behavior, including touching her breasts and trying to kiss her.

・When the woman refused or fought back, Vega repeatedly said things like “I’ll give in someday” and threatened to reveal the photos.

・Harassment such as insulting during a meeting, demanding sexual rewards when discussing low pay, demanding sexual acts in a room away from the venue during an office party, and nagging about relationships with husbands It is said that he worked many times

・The woman reported Vega’s harassment to Activision Blizzard in 2017, but the company did nothing.