An overseas luxury hotel whose building was used without permission for “CoD: MW2” is a bummer!Consider legal action 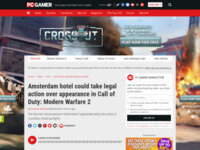 ・The Conservatorium Hotel will appear in the latest Call of Duty: Modern Warfare 2 game

・The hotel’s manager told local newspaper de Volksrant: “We don’t want the Conservatorium Hotel to be the setting for the new CoD,” adding, “We seem to encourage the use of violence.” We do not support games that appear to be , which do not reflect our core values ​​and clearly have unwanted involvement.”

・De Volksrant reports that the hotel is considering what to do next.Hotel denies taking legal action

・Buildings are copyrighted under European and American law

・In 2006, the image of Manchester Cathedral in England was used in Sony’s FPS for PS3 “Resistance ~The Day of the Fall of Mankind~”, and the leaders of the Church of England said, “The depiction is blasphemy and copyright infringement. , it is inappropriate for Sony to let players shoot guns in cities with gun problems.”

・ The Church of England requests Sony to collect and stop selling software, donate to the church, etc.

The uproar came to an end when Sony apologized, stating that it had no intention of causing discomfort.