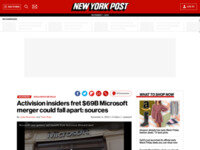 ・Microsoft has announced it will buy Activision Blizzard for $69 billion, but it turns out some insiders fear the deal is effectively a dead end.

Antitrust authorities in the United States, United Kingdom and European Union are reviewing Microsoft’s proposed acquisition of Activision for $95 per share.

Activision’s stock jumped above $82 when the deal was announced in January, but has since fallen to below $73 on Thursday.Investor skepticism about deal closing is growing

・Some officials and analysts likely did not expect Microsoft, which had relatively good relations with regulators compared to rivals such as Meta and Google, to face such intense scrutiny. Says

・Microsoft and Activision are ostensibly claiming that the transaction will be completed with a brave face.

・But heightened regulatory pressure has put the companies at odds behind the scenes, according to people familiar with the matter.

・Microsoft’s head of games, Phil Spencer, said that Activision’s popular Call of Duty series will continue to be released on the PlayStation, and may also be available on other consoles such as the Nintendo Switch. professed to

・But Reuters reported last week that Microsoft refused to offer legal remedies to EU regulators before a full-scale investigation was launched.

・Microsoft declined the option to offer concessions, including a formal commitment to keep Call of Duty on PlayStation to EU regulators.

According to Activision officials and analysts, Activision should show its conciliatory stance to regulators now because the company’s shareholders will get dividends regardless of whether Microsoft makes concessions. said to want

・Some analysts and pundits argue that the option to keep Activision’s games exclusive on Xbox is a large part of the deal’s appeal.

・Sources say it’s important to publicly vouch for the PlayStation version of Call of Duty, but legally binding waivers of exclusivity could hinder acquisition talks.

・Dan Ives, Managing Director of Wedbush Securities “Microsoft’s decision to acquire Activision boils down to acquiring exclusive distribution rights.”,“If abandoning exclusivity is one of the concessions required, Microsoft will have to ponder whether this is still the right deal.”said

・If the European Commission, the UK Competition and Markets Authority and the US Federal Trade Commission reject the deal, Microsoft will have to pay Activision $3 billion in damages.That’s a relatively low amount for a $1.7 trillion tech giant.