[Activision Acquisition]MS claims to have offered Sony a 10-year contract to keep CoD in PS! ‘Sony is misleading regulators’ 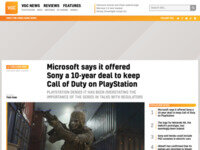 ・Xbox told the New York Times on November 11 that it had offered Sony a 10-year contract.Sony declined to comment on this allegation.

The future of the Call of Duty series as a multi-platform product is one of the key areas for regulators around the world scrutinizing Microsoft’s proposed acquisition of Activision Blizzard.

・Microsoft says Serbia will soon approve, but of the 16 countries it reviewed, only Saudi Arabia and Brazil have approved so far.

Xbox boss Phil Spencer promised in September that Microsoft would wait “a few more years” to bring Call of Duty to the PlayStation after Sony’s current deal with Activision expired. That will reportedly be after the release of a new game from Black Ops developer Treyarch in 2024.

But PlayStation boss Jim Ryan has publicly refuted Microsoft’s proposal to continue releasing Call of Duty games for PlayStation, calling it “insufficient on many levels.”

・UK and European regulators have since expanded their investigations into the deal.Microsoft says it’s ready to make concessions on the future of the Call of Duty series

・In response to the UK Competition and Markets Authority’s (CMA) decision, Microsoft called the regulator’s concerns “misguided” and claimed it was “adopting Sony’s complaint without an appropriate level of critical review”.

・He then accused Sony of deceiving regulators and “overstated the importance of Call of Duty to its survival,” he told the New York Times.

・PlayStation’s Ryan said in a statement that it was “not true” that the company deceived regulators.

・Ryan argued that “Microsoft is a tech giant with a long history of dominating the industry,” and that “if this deal goes through, it will likely end the options gamers currently have.”