[Acquisition turmoil]Xbox’s Phil Spencer said, “I can promise to keep CoD on the PlayStation for a long time, but I can’t say ‘forever’.” 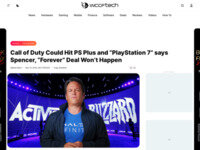 ・Microsoft’s head of games, Phil Spencer, has said he’s open to committing to Sony and regulators to keep Call of Duty on PlayStation for the long term. .However, it seems that it cannot be said to be “forever”

Spencer suggested that Microsoft would treat Call of Duty the same as Minecraft and offered to extend its contract with Sony by three years, but PlayStation boss Jim Ryan denounces the deal as “inadequate on many levels”

・Spencer, who appeared on The Verge’s Decoder podcast, said that as Microsoft continues to wait for approval of its proposed acquisition of Activision Blizzard,Willing to make commitments that satisfy Sony and global regulatorsexplained

・Mr. Spencer“I’m totally fine with signing a contract with Sony for a few years and making a promise to keep releasing CoD on PlayStation. I’m very willing to do that. No problem at all.”,“But you can’t write a contract like ‘forever’.”,“It’s perfectly fine to make long-term commitments that Sony will agree with and regulators will agree with.”talked with

・If Sony wants to bring CoD to PS Plus, Spencer says he’s in favor of that too.

・Spencer promises CoD will stay on PlayStation for a long time, but not necessarily forever

Of course, Spencer’s remarks will lead to a lot of speculation.

・California’s Department of Fair Employment and Housing (DFEH) is taking legal action against Activision Blizzard one after another, alleging that gender-based discrimination and sexual harassment are prevalent.