A story that the future where access to Steam etc. is blocked by the government may not be zero 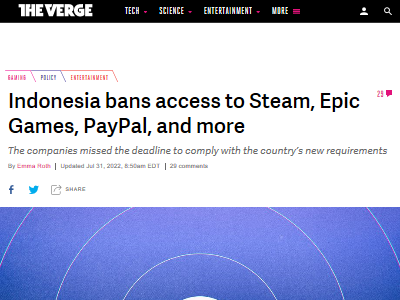 ・The Indonesian government blocks access to services such as Steam, Epic Games, PayPal, and Yahoo.The country newly required companies to register as “Private Electronic System Providers”, but it was effectively banned for failing to comply.

・By registering for this service, the Indonesian government will be able to obtain a database of specific users, and will also have the power to forcibly remove content that disturbs public order or is illegal.

・The Electronic Frontier Foundation (EFF) pointed out that this system violates human rights.

・The ban is not permanent, and the service can be used if the overseas company registers with a “private electronic system provider.”Companies such as Apple, Microsoft, Google, Amazon, TikTok, Twitter, Netflix and Spotify have already registered.

See? Is piracy the best?

The Indonesian government really wants to monitor and regulate the internet

But if the surveillance system becomes stronger in Japan, there is a possibility that something like this could happen…
scary scary

You will be banned for in-game nuisance without needing to be.
Don’t worry unnecessarily