A parent and child who assaulted a rival player at a “Pokemon GO” gym spot were convicted. 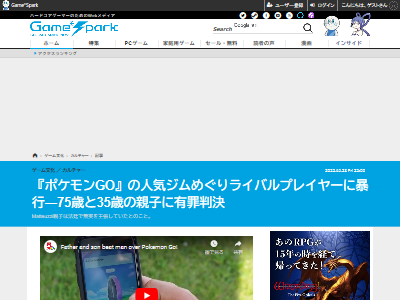 The incident took place in June 2018 at a gym in Kirkwood Park in St. Louis County, Minnesota, USA, one of the popular spots for Pokemon GO players, and witnesses say the two teams had been fighting for a long time. thing.

Matteuzzi and his son belonged to a different team, and when an argument escalated in the park with the victim, who had the handle name “Sammy the Bull,” his son first beat Sammy and dropped him in the park lake, and then relentlessly repeated. In addition to the beating, the father jumped into the lake and forced the victim’s head into the water, leaving Sammy with facial abrasions, traumatic eye injuries, broken fingers and detached nails.

Are these parents and children stupid at a good age?

What are you going to do if you’re so serious about this game?

Since it’s a fighting type with water, it’s Nyorobon.

I can’t be that passionate about games

This is why non-game natives…

Looking at it this way, I think that “human childishness” is decided at a relatively early stage in life.
Childish people remain childish when they get old and famous

They can’t even be put upwind of a Pokemon breeder.
Team Rocket is still better

Or rather, my son is 35 years old, what are parents doing at a good age…
Don’t do it because the image of Uncle Pokemon will get worse.