A new project for the robot anime “Grendizer” has been announced! 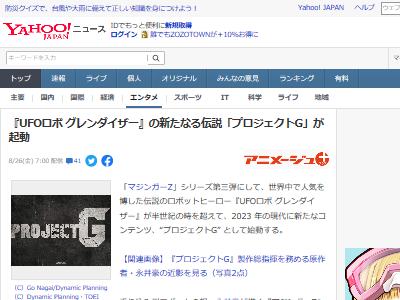 The legendary robot hero who gained popularity all over the world as the third in the “Mazinger Z” series.“UFO Robo Grendizer”has crossed over half a century to the present day in 2023New content, starting as “Project G”do.

All 74 episodes of the TV anime were produced with an average audience rating of over 20%.moreoverIt has gained popularity in Europe, the Middle East, South America, and other parts of the world, and in France it has achieved an astounding 100% audience rating.It has been loved by many people for a long time.

It seems that the internationally popular Grendizer will be revived as a new project!
The overall command is Go Nagai-sensei!
French people are probably the most concerned about what kind of revival they will make!

It is rare for Go Nagai to interfere in a film adaptation.
It’s the first time I’ve filmed that much, isn’t it?

Is Project G a normal remake?
I would be happy if the design was a normal Grendizer
I’m looking forward to seeing Koji-kun appear as well

Is it aimed at the French market?

Grendizer is minor in Japan, but it’s nationally popular in France and the Middle East.

The popularity of Grendizer in France and overseas is abnormal (true).

Gundam in Japan, Grendizer in France

Bigger and grass than I imagined

Amazing, is this Italy?
Why do you like Grendizer so much?
Is it the same as Japanese people only like Sangokushi?

It’s a work that’s more popular overseas than in Japan, so I hope it doesn’t disappoint.

Europeans who watched “Goldrak” without being bound by the series probably simply understood and enjoyed the work.
I guess that’s the temperature difference between Japan and Europe for “UFO Robo Grendizer”

A French game company announced a game last year, but is it different from that?

If it’s just a game, I feel like they wouldn’t put Go Nagai in the video.
I wonder if there’s a development other than the game