A new Chinese game “Gento” that looks exactly like “Genshin”, suspicion that the character’s motion is copied from “Genshin” has emerged.

Suspicion that the character motion of “Gentou” is copied from “Genshin” has surfaced. However, even those who feel “repeating history” – AUTOMATON 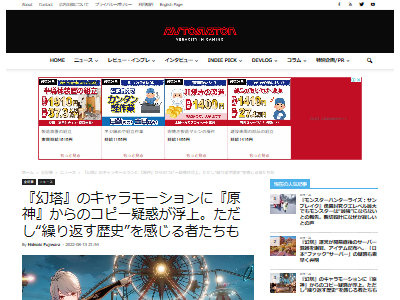 (Partial summary below, details to the source)

A free-to-play Sci-Fi open-world RPG that launched on August 11th for iOS/Android.Regarding “Tower of Fantasy”, a video comparing the character motions of this work and “Genshin” is posted on the overseas bulletin board Reddit, and it is calling for discussion.It says.

This work is often likened to the popular title “Genshin” due to the fact that it is an open-world ARPG born in China and the similarity of its contents.

The post below is a comparison video of attacks and other motions of characters from Gento and Genshin.There are similar actions such as the motion when the weapon is put down, and the images have common points, including the atmosphere of the drawing.

In the same thread, there are two opinions, “not similar” and “similar”, and there are also voices saying that “the whole is similar rather than the motion”.

Some users seem to strongly feel the similarity of the motions, and there is also an impression in the thread that the motions are “copy pasted”. As a whole, there seems to be a majority of opinions that “Gentou” is somewhat similar to “Genshin”.

However, some users point out that ‘Genshin Impact’ received exactly the same criticism when it was released.At the time of Genshin Impact’s release, it has been commented that there are elements that have been copied from multiple games such as Nier: Automata.

Come to think of it, Genshin Impact was also told about Nier’s motion.

I thought it was made by my cousin

In the first place, even Genshin Impact is said to have a lot of motions that seem to have been seen somewhere.

↑ I don’t think Genshin Impact was the first one with the stamina or wall climbing system…
It’s in various games, or rather, I feel that there are almost all games of this type.

It was the same when Genshin was released.
But what makes it different from Genshin Impact is that it’s a game that’s already hated in China.

Whether it’s a pakuri or not, it’s operated by China and Japan is useless lol

If it’s not against the law, I personally want to be tolerant of these ripoffs and traces. First of all, there is no such thing as a “completely original work that does not overlap with anything else” in this world. I can’t get through.

Don’t you know that you’re addicted?

Until I saw this article, I thought Gentou was the same Mihoyo as Genshin Impact.

Even before the release, people said, “This is Genshin Impact.”Is there an indication that
I don’t know the truth, but it’s possible

There are always people who say, “If the game is fun, it’s fine,” but that’s not the case.
It’s fine if it’s just “similar games that have been influenced”, but it’s not good if you illegally copy and use data from other works…