[! ? ]A female gamer defeats almost all bosses, including the strongest enemy “Malenia” in “Elden Ring”, with “level 1 and one-handed play” wwwwww


The powerful enemy Malenia in “Elden Ring” is defeated by level 1 one-handed play. Almost all other than Malenia are defeated – AUTOMATON 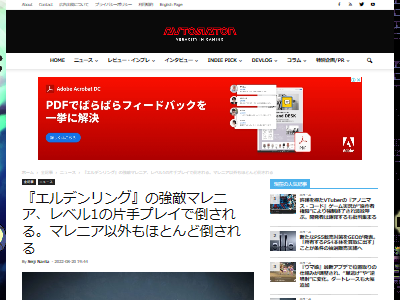 Mr. Mikkaa, a streamer who is doing live game activities on Twitch,Succeeded in defeating the difficult boss “Mikela’s Blade, Malenia” in “Elden Ring” with one hand and character level 1..

In the footage of defeating Malenia, you can actually see how the DualSense controller is manipulated with one hand.
He wears something like a sock on his right hand. He drapes his left hand over the controller and skillfully navigates through each input.

Eyo I did it! Killed Malenia Level 1 using ONE HAND only! Next up is Malekith and Placidusax, good times. pic.twitter.com/N6Qit088pl

This is a faded person

I saw the video but it’s really bad

One-handed play… operating the placed controller like a keyboard

I’m too scared to fade away

I don’t know what you’re talking about anymore

It’s a true god game where anyone can win if they reach a level where they can win by manipulating characters with their mouths.

e···? Defeat that Malenia at level 1 and with one hand…?
I had a hard time just defeating him like normal…it’s too bad

This is the next one leg challenge ()