【Really? 】 The possibility that Nintendo’s popular game will be compatible with PC has emerged! Is it finally coming! ?

Is Mario Kart Tour Coming To PC?Leaked information that input with a mouse is possible 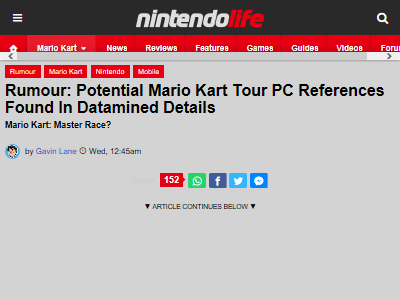 “Mario Kart Tour” for smartphones may be compatible with PC in the future.

This work was updated the other day, but Nintendo apparently added “mouse input” here. In addition, multiple codes related to “native emulation” have been found, and it has become a hot topic that it will be playable on Windows 11.

Mouse input may be a “leftover” of developer tools, but the mention of emulation hints at PC support.

Mouse was added to input mode from data analysis

Follow up/Datamining: They have added the mouse as a new input mode. Please note that this is speculation and may never be available to the public. Maybe it’s only for the developers to use. #MarioKartTour

Update: #MarioKartTour
There appears to be some sort of evidence that the game is being prepared to be playable on Windows 11. Here are just a couple of new stuff added to the code to support this: Don’t take this with too much certainty though, pic.twitter.com/tCn9cm7g06

Will Mobage come to PC for Nintendo works?

Please port Pokemon Unite to PC instead of Marika! That one is a good match!

It’s too mysterious where the demand is

Hmm? ? Marika is on PC! ?
Will we finally be able to play Nintendo games on PC?No, but it’s Marika

It’s true that I don’t feel like I can control Marika well with a mouse…
But if it goes well, I’d like you to increase the number of compatible titles